Linet Muthoni, a Form One student who scored 303 marks out of the possible 500 in 2020 Kenya Certificate of Primary Education (KCPE) examinations, joined her dream school on Sunday, August 8, a few days after she attempted to take her own life.

Muthoni’s parents had failed to raise the requisite school fees and purchase learning materials and personal effects, prompting her to attempt suicide.

However, her neighbours raised an alarm and sought police intervention. The officers from Maragua Police Station in Murang’a County responded to their calls and rescued her.

They would later offer her counseling before facilitating her admission to secondary school. Her overjoyed mother could not contain her appreciation. 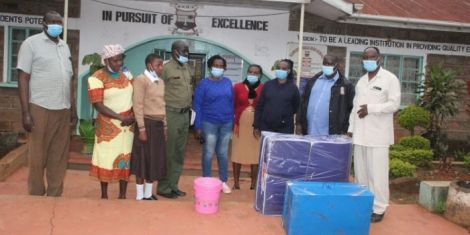 “I want to thank the OCS (Cleophas Juma), the principal, the Chief and all other well-wishers who assisted my daughter. God bless them for their kind gesture,” Lucy Wangechi’, the mother, stated after enrolling her at Kiangunyi Girls Secondary School.

Murang’a Assistant County Commissioner, Joshua Okello, stated that he coordinated the efforts to get the girl to school after the OCS reached out to him.

OCS Juma reached out to the girl’s mother, summoned her to the police station and broke the good news to her in the company of officers who raised the funds.

“When the case reached him, he took up the matter very actively and had even talked to the principal of the secondary school informing her to expect the girl,” Okello said.

The student expressed her gratitude to the officers, promising to do her best in realising her dream.

“I had lost all hope. I thought I would be condemned to doing menial jobs because I did not think my parents would be able to enroll me in school,” the Form One student appreciated.