The August 9, 2022 polls now hang in the balance after President Uhuru Kenyatta cast doubt over their viability following a Court of Appeal judgment that poked holes on the composition of the Independent Electoral and Boundaries Commission (IEBC).

While speaking to media on Monday, August 23, President Kenyatta weighed in on the clamour to postpone elections, stating that the polls may not happen if the Court of Appeal judgment is anything to go by.

The President noted that the seven-judge bench headed by Justice Daniel Musinga ruled that IEBC lacked the quorum to conduct the referendum as proposed in the Building Bridges Initiative. The ruling has sparked debate amongst analysts and costitutional lawyers on whether the IEBC composition will affect the next year’s elections.

However, the Head of State was categorical that he is not focused on pushing the elections forward but rather focused on completing his term and preparing for transition once he moves out of office.

“If what the court ruled on BBI is anything to go by, then we cannot have the General Election owing to the IEBC composition. I do not want to comment on that. Let us wait and see what unfolds. I am ready for the election at the prescribed time as I have said several times,” he added. 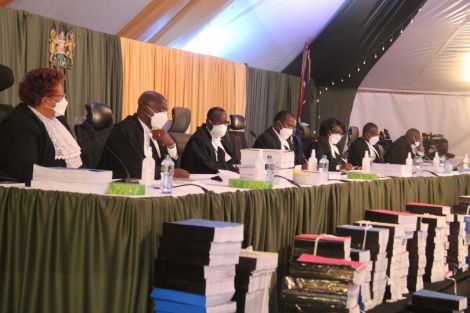 “So that is all I have to say on the issue – I am working on that election and transition schedule.”

In their ruling issued on Friday, August 20, six out of the seven judges (Justices Daniel Musinga, Roselyn Nambuye, Hannah Okwengu, Patrick Kiage, Gatembu Kairu and Francis Tuiyott) agreed that IEBC does not have the requisite quorum for purposes of carrying out its business relating to the conduct of the proposed referendum.

This includes the verification of signatures, and whether the initiative as submitted by BBI is supported by the requisite number of registered voters per Article 257(4) of the Constitution. Justice Fatuma Sichale, however, dissented.

According to the IEBC Act, the commission needs eight commissioners to carry out its mandate. Political analyst, Mark Bichache, argues that there are gaps that can lead to the postponement of the elections.

“This is not a loophole that can be exploited by Uhuru as claimed by certain quotas. These are the consequences of the ruling. The Court of Appeal says that IEBC is not properly constituted but does not say how it should be done.”

“In as much as Kenyans are busy celebrating a ruling that has nullified the BBI, they are not looking into other aspects which are detrimental in the long term. We recently recruited commissioners for the IEBC and this was done per the law. Is there any other way to nominate and vet these commissioners? No there is not,” Bichache told Kenyans.co.ke.

He added that the courts’ issue rulings that may be difficult to implement at times. His argument was based on the one-third gender rule affecting the composition of Parliament. The analyst opined that it is hard to ensure the gender rule is implemented as the majority of the politicians are elected by the voters.

“The Court of Appeal ruling added that President does not have authority under the Constitution to initiate changes to the Constitution, and that a constitutional amendment can only be initiated by Parliament through a Parliamentary initiative or a popular initiative (the Wanjiku). Which Wanjiku has the power and resources to do so. If I ask you to raise one million signatures, can you achieve this?” He questioned.

However, constitutional lawyer and advocate, Apollo Mboya, argues that the quorum question will be addressed when the four commissioners nominated by Uhuru to fill the four vacant positions are approved by Parliament. These are Juliana Whonge Cherera, Francis  Mathenge Wanderi,  Irene Cherop Masit and Justus Abonyo Nyang’aya.

“Yes, I agree that from the ruling, the IEBC cannot undertake some policy decisions. However, the four commissioners may soon take office and the composition of IEBC would be fully resolved. Unless certain delays occur,” the former Law Society of Kenya Chief Executive officer noted.

University of Nairobi lecturer, Dr Jane Thuo, concurred stating that postponing election on any grounds would culminate into further litigations.

“From Uhuru’s demeanor in the interview, he is solely focusing on leaving the country in peace, not staying in power,” the gender and communication expert stated.

The IEBC Act fails to answer the question; What is the period in which IEBC should be fully constituted before a General Election? This remains a gray area that can be exploited.