Speaking at the funeral service on Tuesday, September 7, Larry broke down as he shared stories of how life was growing up with his grandmother, Francisca Madowo.

The CNN journalist told congregants that his grandmother was proud of all her grandsons and daughters, and she had a personal relationship with each.

Madowo shed tears as his voice broke, revealing that his grandmother was the only person who called him Omondi, while everyone else calls him Larry.

He shared funny stories of his grandmother’s sense of humour telling the gathering that she would watch him on TV and wave at him but she realized he never waved back.

Larry stated that when he went to visit his grandmother she would raise a storm and ask him why he did not wave back when she saw him on TV. 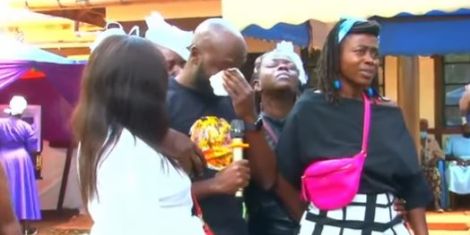 Madowo described his grandmother as a loving woman who took care of her grand sons and daughters after they lost their parents.

In his tribute, Madowo stated his grandmother raised him from the age of 10 when he lost his parents.

On Friday, August 27, Larry announced the demise of his grandmother as he expressed his fondness and love for her.

Madowo described his 96-year-old grandmother as the heartbeat of their family, adding that his heart is broken.

“My grandmother, the family matriarch, our heartbeat, my comedy partner, the dearly loved Francesca Madowo, has joined the ancestors,” the CNN correspondents tweeted.

“I am numb. My heart has been ripped from my chest. Light has gone out of my life. Nind gi kwe, min Omollo (Rest in peace, Mama Omollo).”

A month ago, Madowo stated that his grandmother had been on a ventilator for four weeks after contracting Covid-19.

Andrew Kibe Blasts Nameless For Not Performing Well In Music, Calls Him Ugly