The family of Mpho Mathibela who was born conjoined to her twin Mphonyana in 1986 will remember her as a loving, respectful and a person full of laughter.

Mpho died in hospital on Friday. She was 34.

Her older sister Kedisaletse and their mother Sophie said Mpho had over the years suffered from epilepsy and would have seizure attacks every once in a while.

In July, she couldn’t move her legs and had trouble walking.

Mpho and Mphonyana grabbed the world’s attention when they were born joined at their heads in 1986 at Tshepong Hospital in Klerksdrop, North West.

They were later transferred to Chris Hani Baragwanath Academic Hospital in Diepkloof, Soweto. 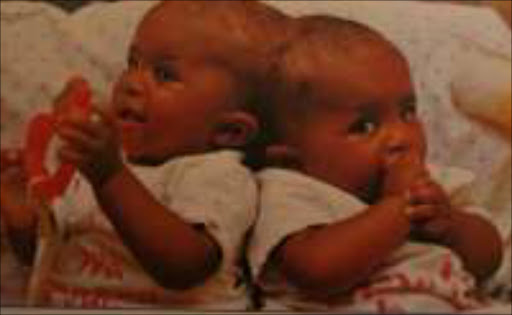 They were successfully separated in 1988 by a team led by chief neurosurgeon Dr Robert Lipschitz. Mphonyana died of pneumonia a year later.

Kedisaletse said last week Monday, they took Mpho to the clinic in Klerksdorp and they were advised to take her to hospital since her blood pressure was unstable.

She was then admitted at hospital and her mother was informed she had pneumonia.

“We are still waiting for the autopsy report to find out what actually happened to her,” Kedisaletse said.

Her mother said the last few weeks when Mpho was immobile were the hardest as she couldn’t properly give her all the care she needed because of her old age.

“In the last few weeks she couldn’t walk and we struggled together. I would try to lift her up to help her but I couldn’t. She comforted me that soon she will be at peace,” Sophie said before breaking into tears.

“Mpho had so much respect and she will always give thanks. Even after you gave her a bath, she will thank you for it.”

“Mpho was forever laughing. She was such a lady that didn’t like to go to the streets and was always in the house.

I’m going to miss so many things about her. We were best friends growing up and after I had kids when I got married, she helped me raise them.

“She became friends with my kids and used to play with them. My kids have been asking when she will visit them and it’s just so sad to explain to them that she is gone.”

Kedisaletse said the family had not finalised funeral arrangements and were considering having the funeral at the weekend.

She asked for public donation for the funeral so they can give Mpho a fitting send-off. She added that in the last 10 years her family felt abandoned as the public stopped being charitable to them.

“I won’t lie to you … at the moment there is no food, we have nothing. We will welcome whatever little contribution from people,” Kedisaletse said.

“Sometime you are afraid to ask for help and it’s embarrassing. But my mother and Mpho have been living off social grants. My mother had a burial society that will assist with the coffin.

“But we are in a panic in terms of food and other things, because even though we are under Covid-19 regulations people will force to come to the funeral. Mpho became a public figure and became a child of the nation,” Kedisaletse said.