Three Form Four students raided and beat up their Maths teacher in his home.

Nicholas Bett’s, a teacher at St. John’s Sikinwa in Saboti Constituency was attacked at his home by the students at about 7.30 pm.  They ambushed his resident which is just adjacent to the day and boarding school.

They reportedly struck Bett with a blunt object on his neck. Thereafter, they landed on Bett, who was now outnumbered, with blows and kicks. 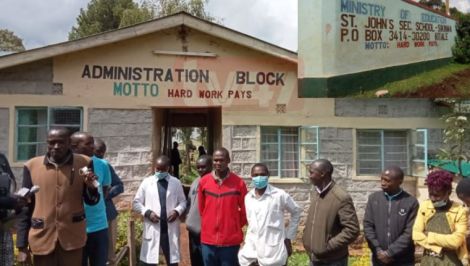 The altercation is believed to be a retaliation to the no-nonsense teacher who insists that students take interest in his subjects.

Two other teachers who live in the same compound as the victim managed to escape the ordeal unharmed. John Naibei and Michael Odhiambo escaped after neighbours raised alarm, forcing the students to flee.

Naibei and Odhiambo filed a report at Gituamba Police Station and demanded for the arrest of the truant students. They also want the students to be charged in court.

The three students are still at large and have not reported to school since Monday.

Stakeholders had previously raised concern over the increased cases of students engaging in confrontation with teachers with this being the latest occurrence.

In January, a Form Three student at Kisii High School brought harm to two of his teachers. He allegedly attacked them for punishing him after reporting late to school.

The Ministry of Health has recently raised concern over the state of mental health among Kenyans.